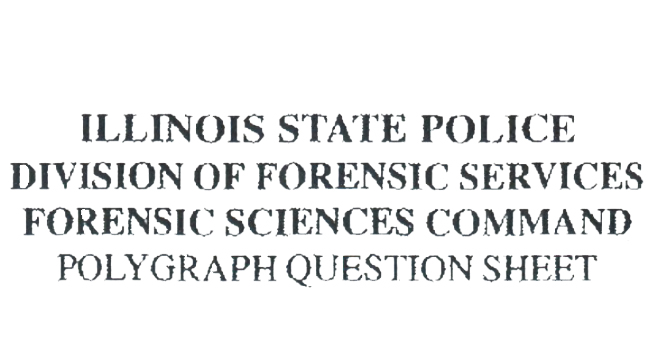 If you were to listen to Bloomington Police Detectives and McLean County Prosecutors involved in Barton’s case, they will say that Misook was never really considered a suspect. In fact just a few weeks after the murder, the lead detective on the case, Detective Larry Shepherd, testified to the Grand Jury that he had already eliminated Misook as a suspect. Despite his assertion, subpoena’s had been issued for Misook’s phone records and she was requested to submit to a Polygraph Examination, otherwise known as a “Lie Detector Test”. Polygraph examinations have been ruled to be unadmissable as evidence by Law. However they can be used by Detectives in order to evaluate whether a suspect is being truthful or not. If found to be untruthful, then more digging should be done. Barton on the other hand was never requested to take the Polygraph Exam, even though he volunteered on a number of occasions to take it in order to show his truthfulness.

Here we have the full report which in its own right is treat for everyone to see. When taking a polygraph examination standard questions that are straight forward and easy to answer are asked of the subject in order to create a baseline. Questions like “what is your full name? Where do you live? When and where were you born?” The baseline then is compared to questions that are more specific as to the crime that was perpetrated itself.

Misook was asked four “hardcore” and specific questions surrounding Christina’s murder, and Misook failed every single one of them showing signs of nervousness and in turn, Deception. These questions were:

As the Polygraph Exam did not take place until several weeks after Barton had been arrested, and the lead detective Larry Shepherd had already made his declaration to the Grand Jury that Misook in his view was no longer a suspect, how then to explain the utter failing of Misook of her Polygraph Exam? By insinuating that Misook failed on her four questions all for the sake that there existed “language barriers”. Meanwhile Misook was known to have hung around U.S. servicemen in Korea for years before she met and married her U.S. Serviceman Andy Nowlin who brought her back to live in Heyworth, Illinois, in 1989. So besides having already learned English while living in Korea, she then lived in the United States for approximately ten years before murdering Christina. And was so proficient at English that she was hired by a business called Anderson Financial that was subcontracted by AT&T to do all mobile phone billing with Misook specifically hired as a translator to help Koreans understand their bills if they had questions. So it is implausible that Misook failed these four key questions due to her having a language barrier and not understanding the nature of the question or intent.

This pattern one will find throughout the course of the Barton McNeil murder case. Time and time again incriminating items exclusively point to Misook, yet are always systematically discounted and ignored by the investigators and prosecutors. After all, Barton has now been in prison for over a month and if they now suddenly free him and charge Misook, Bart would likely have a legal claim of some kind for false arrest. Better to go “all in”. As a result Barton lost his life, his daughter never attained the justice she deserved, and an elderly woman, Misook’s mother-in-law, was murdered. So one murder becomes in effect three murders because of all of their short-sightedness. Who is to blame? Most certainly the trio of then acting State’s Attorney Charles Reynard, then acting First Assistant Teena Griffin and then acting lead Detective on the case, Larry Shepherd. Everyone else played supporting roles either wittingly or unwittingly. Some might even say “accomplices”.

The following two-page report is the report submitted by the Polygraph Examiner to lead Detective Larry Shepherd that shows Deception by Misook on 4 key questions regarding the evening of the Christina McNeil murderDownload
The following one-page police report is how between Detective Larry Shepherd, and likely in advance consultation with Terrence G. McCann, was able to discredit the results of the Polygraph Exam and tuck away the exam results in his file as though the exam never happened.

One must keep in mind that approximately a month after the Polygraph Exam was received by Detective Larry Shepherd, that he then found himself the assigned lead Detective yet again on another Bloomington area child related caper since he was in charge of the Juvenile Crimes Unit for the Bloomington Police Department. This newly assigned case involving none other than Misook who was charged for the felony abuse of her own then 8-year old daughter Michelle Nowlin in a smothering, pinching of the nose, beating and murder threatening incident where according to Misook, as told by Michelle to her Heyworth (IL) Elementary School Principal Ms. Aissa Frazier, “she needed to behave or the same thing that happened to her sister would happen to her”.  Michelle Nowlin had no blood related sisters living in the area (she had step-sister many years older that Misook had given up for adoption while living in Korea). Three-year old Christina McNeil was who Misook referred to as “her sister” as Bart and Misook shared an apartment together with the girls spending frequently spending time together. The smothering incident was also not handed over by McLean County prosecutors to Bart’s defense attorney Tracy Smith as the important information should have been which had it been, would have been of invaluable assistance during the March 4, 1999 “Offer to Show Proof” hearing regarding the State’s Motion in Limine from successfully ruled upon by the judge overseeing Bart’s case, which he did approve following this hearing, such that Barton McNeil was unable to utter the name “Misook” at his very own trial.

As a macabre footnote, following Barton’s arrest all of his apartment belongings were taken to the Salvation Army. Ironically Misook was working there as a volunteer as this was part of her sentence due to her being found guilty of assaulting Barton McNeil and Christina McNeil the year prior with her being sentenced to perform a number of community service hours. Misook recognized Bart’s personal belongings when his property manager donated them to the store and purchased Christina’s deathbed and required her daughter sleep on it, despite her protests and knowledge of the significance of the deathbed, which caused further trauma in this poor child that also is referenced within the Misook felony beating case of her daughter Michelle. Download

This site uses Akismet to reduce spam. Learn how your comment data is processed.